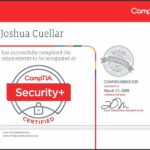 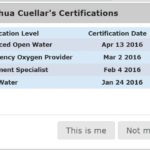 This section of the website is a list of the credentials that I own and can be considered a bit of a web portal, albeit a small one. I’ve obtained credentials on a few topics one of them is Christianity, another is Information Systems and Technology I also have an Advanced SCUBA Diver credential that lets me dive to 140 feet. The three topics are not related to one another nor do I try to combine them. I also have qualifications in various topics such as SCUBA Diving, General Education and as a First Responder.

Since I have a bachelors degree from a regionally accredited USA university, I have a  general education credential because the general education credential is included in every bachelors degree from a regionally accredited university in the USA. This means I am legally competent and able to understand the math and grammatical sentences most commonly used in society for legal and contractual purposes.

According to Oxford, credentials is a medieval Latin word that began as credentia.  Based on my knowledge of Ecclesiastical Spanish, word etymology and studying the word’s origins, I feel this was commonly mispronounced as “creencia” (belief) or “siencia” (science). Siencia would have came about as “si, encia” meaning “yes I believe this is true” because they didn’t know how to properly pronounce “creencia” and were to embarrassed to ask. Midieval books make use of the sentence “ensena me tu siencia” meaning “show me your science” and this would have caused science to evolve to mean “the process of demonstrating verifiable proof”. Going back to credentials the sentence “ensena me tu siencia” should have probably meant “show me why you believe this” or “where did you get these facts” (i.e. “esena me to credentia) and that is where we go back to using the word correctly “who are your references”. Obviously, even the people in charge weren’t thoroughly educated and were still learning which is o.k. because it is estimated the world had about a 1/2% literacy rate during the midieval time period.

Credentials are often used as a reference which is why a low graduation rate at a college or University is not necessarily a bad thing. This means not everyone was able to receive a degree and it makes the degree of those who passed more valuable as long as the school is honest and has a high quality program based on their available resources.

In that senses, the organizations granting me my credentials and qualifications have giving me a reference. The reference essentially states that I am competent and qualified in the topics the credential covers.

In this context, academic degrees are a credential for your area of study as are any type of professional certifications you obtain. For those not going to college and working their way up a career ladder, your resume or C.V. along with verifiable professional references act as a credential. These credentials give you access to certain resources, sometimes at an entry level and other times at a mid career or professional level. Some resources can only be obtained through specific corporations so there is again a chance of misinterpreting the word for “gain access”. However, while you can gain access because of your reference, people can also seek you out for assistance because you have a reference. You can also be denied access even if you have accepted credentials due to other factors in your life. In modern English, credentialed can literally mean “reference holder” and the word credential can mean “proof of an accepted reference”.

Because the word credential was used to “get access to a professional resources”, the word is often used in computer systems in the context of “please enter your credentials” for a username and password; however, this word is being deprecated in favor of the word authenticate because authenticate means to “prove it is you”. So a computer would ask a user “authenticate yourself” and to “please place your credentials on your professional profile” or alternatively to enter the credentials during the registration process and wait for verification before being allowed to register.

So, this section contains the credentials I’ve obtained throughout my lifetime. I own these credentials and they can not be removed or taken away. Some can expire but would still remain as qualifications that can be used in an emergency only if requested or if nobody else is around to respond.