Loading
Skip to content
TwitterYouTubeLinkedIn
Search
You are Here:::→Blog→Government→The Role of the President of the United States

The President of the United States serves in two roles.

The President can not create laws and the President can not issue judgments for any crimes that are committed. The President can pardon someone for being arrested and prosecuted for something that is not illegal but in 2020, this “pardon” is just as easily obtained through a criminal record expungement after filing a motion to dismiss sentence for unlawful prosecution.

The US Government is divided into 4 categories

The first three branches of Government were created through the US Constitution in 1787. The forth Branch of Government came about as a result the US being a founding member of the UN in 1949 and having ratified the Geneva Conventions in 1955.

The Geneva Conventions 1949 necessitate that Civilian Government be separate from the political institutions of the Armed Forces in order for nations to remain complaint with the Forth Geneva Convention. This may seem confusing because the Armed Forces normally represent a nation but in practice, the Civilian Government provides authorization for a Nations Armed Forces to conduct military action on its behalf. This military action must be lawful and properly authorized under existing war contracts.

The President of the United States thus serves two roles.

Maintaining this segregation can be a challenge and much reorganization and restructuring of the US Federal Government and Armed Forces has been done since 1949 with one of the most recent changes being the creation of a Federal Police Force, United States Homeland Security, in 2003 and creation of the Office of the Director of National Intelligence in 2004.

The President of the United States is then tasked with acting as a CEO or Director of the US Federal Government and as the Supreme Commander of the US Armed Forces in two separate and segregated roles. The White House National Security Council can be used by the DNI and JCS to discuss matters where it is unclear whether a matter pertains to Civilian Law Enforcement or to the US Armed Forces with the President acting as liason between the two organizations. 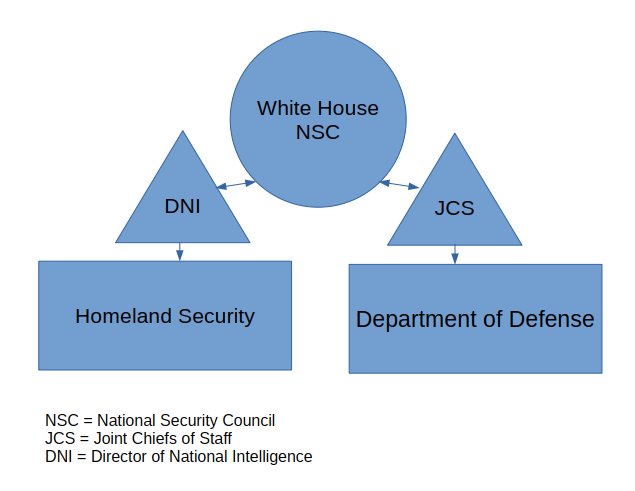 An important note is that the following organizations are part of the US Judiciary and fall under the authorizations and authority of the US Supreme Court rather than the US Federal Government. Usuing the following organizations for the purpose of US Law Enforcement would be a violation of US National Documents, a breach of the separation of powers and would cause irreparable harm to the reputation of the United States as a competent and lawful nation:

The authorizations for these oganizations can be found in Title 28 of the US Code.

An example of how these organizations can be called into service by Law Enforcement in a Constitutionally Compliant manner is as follows:

Homeland Security Investigations obtains a warrant to conduct surveillance and discovers a warehouse with unlawful contraband. Homeland Security Investigations submits a request for Search and Seizure to the Courts providing an itemized list of contraband to be seized as evidence along with the location of those items. FBI receives the warrant and retrieves said items for storage in the courts evidene warehouse. If the warehouse contains Alcohol, Tobacco, Firearms or Explosives, the BATFE is called into service to obtain the items listed on the warrant. The Court Proceedings begin and the Homeland Security Officer may be called into court to be cross examined on how they established probable cause to lawfuly obtain the warrant.

In short all of thee organizations work for the US Judiciary and not for the US Federal Government.

The delineatin of duties and respect for the Separation of Powers is a serious issue to consider.

In South Dakota, probation is already part of the State’s Circuit Court Services, this allows the probation department to report directly to the court on the progress of a defendant’s alternate sentence without violating the Separation of Powers. In the case of parolees, the State does not publicly state whether parole and incarceration is part of the Judicial branch. It is worth noting that post sentencing incarceration or imprisonment is different than pre-trial detention and that a parole board functions very similar to a panel of judges or panel of magistrates.

As President of the United States, it is important to understand the delineation of duties and not cross boundaries set for other Branches of Government.

When issuing an Executive Order, the order must be within the guidelines set by existing laws. They are policy directives to the Federal Government  on how to enforce existing laws and treaties. An Executive Order can not rescind or repeal any section of the US Code or Public Law. Modification of US National Legislation must be done through Congress. Creating Laws through the Executive Branch of Congress would be a violation of US Constitution Article I Section 1 and cause irreperable harm to the United States reputation as a competent and lawful nation.

As President of the United States one of the first orders of business is to become familiar with the A to Z Index of Government Department and Agencies and find their authorizations within the US Code. After Documenting which ones have federal authorizations and work under the Executive Branch, the second order of business would be to contact the Director, Inspector-General, Secretary-General or Administrator of each Federal Agency and examine their budgets, goals, objectives and performance metrics to ensure they will be able to meet goals and objectives within their allocated budgets. For 2019, the USA collected 3.5 Trillion in tax dollars and that will be the Federal Budget from October 2020 to September 2021.

The third order of business would be to review this budget and performance metric on a quarterly basis and ensure that taxes collected in 2020 have an estimated budget ready by April 2021. Refunds for 2020 will begin to be issued between January and April of 2021 with so the final budget for October 2021 to September 2022 using money collected in 2020 should be ready by July 2021. Late filers and those with automatic extensions can file as September for their person and October for their business, however, those funds are usually allocated towards the following years tax collection period and should not be relied on until checks or ACH transactions have cleared their bank accounts and have been deposited into the US Treasury.

The goal of these new financial processes is to return the United States into a state of Surplus as was the case between 1998 and 2000 in order to lower the national debt or at a minimum stop accummulating interest on the national debt.

The Fourth order of business would be to review international treaties and agreements, to ensure that we are not in breach of contract for any of our treaties and to attempt to renegotiate on treaty terms for treaties that are not beneficial to the United States.

Upon completion of these duties and tasks, an introduction to the United States Armed Forces along with an overview of the conventions of war would be in order.