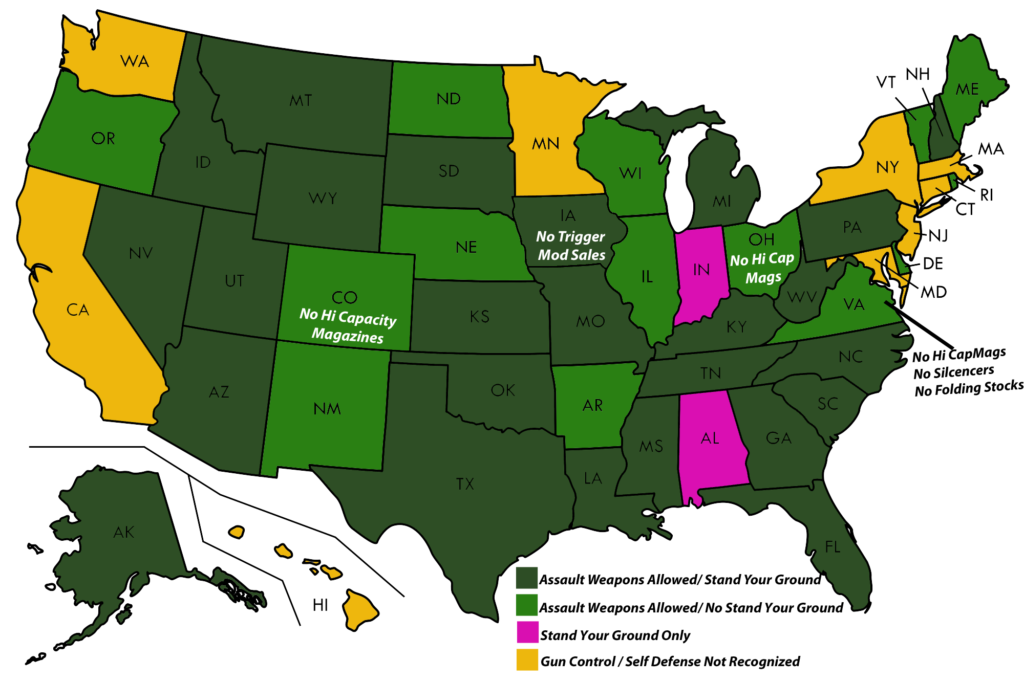 Gun Rights MapThere are 8 States within the United States whose State Government is in violation of the US Constitution. The US Constitution gaurantees every citizen the right to bear arms. At the time of the US Constitutions writing the word arm refered to weapons and shields. In modern times this would include knives, swords, brass knuckles, stun guns, pepper spray, mace and of course guns. Because the word arm includes shields a US Citizen also has a constitutional right to wear body armor and travel in a bullet resistant vehicle or outfit their home with bullet resistant materials. Constitutional rights are citizen rights, they are non-revocable and can not be rescinded, limited or otherwise reduced.

In contrast a permanent resident does not have Citizen Rights, they do have human rights however in addition to rights negotiated through their governments for residents living in the US. In some cases, this may include the right to carry a pistol or rifle with high capacity magazines and large caliber rounds including hollow point bullets. It is up to a judge to be aware of these treaties and make immigration decisions accordingly and to dismiss cases based in citizenship status. For most permanent residents, their home countries or place of citizenship does not allow them to bear arms so they would rarely be allowed to bear arms in the United States without a special agreement.

If a law is not defined stating something is illegal a person can not be charged with a crime. This is part of the Law of Nations and every country must remain compliant with it in order to remain a country. Most countries have a prohibition on prosecuting people under ex-post facto law meaning something must be made illegal prior to it occuring in order for the prosecution and sentence to be valid. In the US, the prohibition on ex-post facto law is part of the US Constitution.

California can very well apply its gun control laws to Permanent Residents, Temporary Residents and Tourists on Visa but they can never apply gun control legislation to a US Citizen as it would be unconstitutional. Under the Laws of Nations, Citizen Rights are irrevocable and their irrevovability is a reason no nation other than the United States has ever given its citizens the Right to Bear Arms. Many citizens in other nations, including the UK, do own firearms but it is under permit and with an enforceable agreement to follow certain rules and not as a blanket right for every citizen.

California’s infringement on citizen’s rights is thoroughly outlined within the California penal code and includes ridiculous stipulations such as being allowed to carry a firearm but not being allowed to carry any rounds in the firearm and forbiding citizens from displaying imitation firearms in public which is an infringement of their 1st amendment rights to freedom of expression in support of the 2nd amendment.

Some sample “legislation” as it pertains to US Citizens include:

These locations are normally part of a persons home and are lawful locations to defend ones life and peoperty. Stand your ground or castle doctrine aren’t optional crime deterrants for states to implement, they are part of common law and international law and documented in the US Declaration of Independece which can be considered an introductory document or preamble to the US Constitution. For legal purposes, the US Declaration of Independence is part of the US Constitution just as the Bill of Rights is.

Self defense and the right to defend one’s property is part of common law and it is part of the US Constitution, those rights can not be revoked or restricted under local laws.