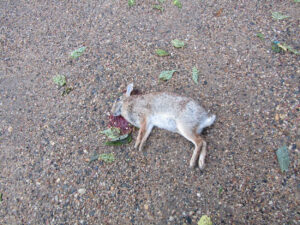 This Rabbit was nibbling on a vegetable garden where I was staying. It was caught trespassing and taking property that didn’t belong to it without payment and without asking for permission. One day, I caught it nibbling and this was the end result. This animal flipped right over from 30 yards. 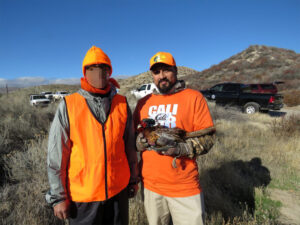 I was invited to a hunting trip on Private Property that belonged to Water and Power through a Free Mason Lodge. This pheasant was shot in the air but managed to survive and was shot again on top of a hill. A more experienced hunter then wrung its neck because it had stopped moving but was still alive. I then took the animal home and skinned it, gutted it, breasted it, cut the meat into cubes and brined it. It was pan fried the next day. 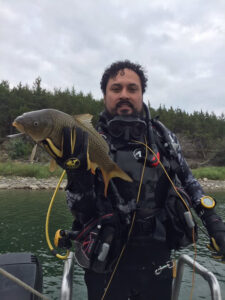 This is an Asian Carp. It’s an invasive species in the Midwest. I dipped into the lake with my SCUBA gear and got this one in under 15 minutes. I got two other carp that day. One struggled and wriggled free from the spear. The other I pulled to the surface. I also speared a Large Mouth Bass that was just barely at the taking limits. So in total I speared 3 Asian Carp, 2 were brought to the boat for measurement and inspection and 1 got free after being wounded. I also speared 1 Large Mouth Bass and brought it to the surface which I got to filet and eat after we were done fishing.